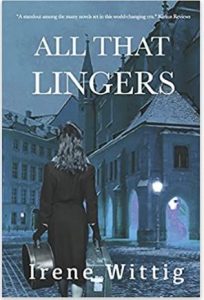 All that Lingers by Irene Wittig

A future that holds such promise. A war that echoes through generations.

The rise of Nazism in Austria catapults Emma’s once idyllic life in Vienna into chaos. As she grapples with the harsh new reality of her country’s betrayal, she desperately clings to her humanity by hiding her Jewish friends. In the aftermath, she finds solace in helping those in even greater need than herself.

The war sends Sophie, an innocent young girl, down unexpected paths. When she returns to Vienna from her American refuge, she will seek her lost history.

Friedrich, Sophie’s uncle, teeters on the edge of what is right and his personal survival. His actions and inaction leave long-lasting repercussions that will threaten to throw all their lives into turmoil again.

Follow the interweaving stories of people through the most tumultuous period of their lives and its wake, as they endure loss, devastation, betrayal and heartache, while still clinging to hope for a better tomorrow.

“A standout among the many novels set in this world-changing era.” KIRKUS REVIEWS, A STARRED Review.

All that Lingers by Irene Wittig is a captivating sweeping, family saga, set against the backdrop of WWII in Austria.  The incredible lives and loves of three close friends will have you glued to the pages of this powerful, mesmerizing story.  A sweeping saga of love, friendship, loss and betrayal, very highly recommended with a big five stars rating.

The story begins in Vienna, in 1934 and carries through to 1961, so this is much more than a war story.  It is a sweeping, exceptionally gripping family saga.  The story comes through the view point of Emma, a woman who sees herself as a failure and not good enough.  Others, however, see her for who she truly is – brave, fiercely loyal and loving.   Emma’s best friends are Greta and Léonie who both happen to be Jewish.  Their life before the war is full of happy occasions and all seems good.  Greta’s husband Otto, works for a newspaper, and Léonie’s husband is a doctor.  They come from respectable and well to do families.  Emma has a poorer background, and lives with her mother who takes in laundry to keep them going.  The class and religious differences don’t affect the ladies friendships.  When Hitler moves into Austria their lives are all changed forever, but their love and loyal ties will carry through the generations making this a stand out, first class novel.  As much detail that went into the good characters, also went into the bad characters. I enjoyed the black, gray and glimmers of white that appeared in the personalities of Marion and her husband Friedrich, they helped to make this an unputdownable gripping story.

Irene Wittig has written a wonderful story inspired by her relatives.  I felt the authenticity of her writing pouring through the pages, which made this an exceptional book to me.  Her pacing is spot on and flows nicely making this well-written and super easy to read.  Her characters are fully rounded and seeped with background that makes them engaging, whether good or bad people.  I cared for the characters and longed for a happy ending.  All that Lingers by Irene Wittig is an exceptional book comes very highly recommended She Reads Magazine.

Buy All that Lingers by Irene Wittig today!!

Award-winning author of stories with a Bollywood beat

All Genres for All Readers