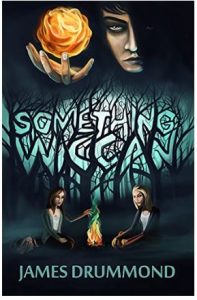 Something Wiccan by James Drummond

You never know what you might find hidden in the attic. Natalie Sherwood is simply looking to stash something for a friend when she discovers a book of spells in her family’s crawlspace. Unsure how seriously to take her discovery, she decides to try some simple enchantments with unsettling results. Meanwhile, after saving his hometown from a pack of werewolves, Toby Hoffman is recruited by an elite group of international hunters to help confront supernatural creatures across the globe. His first mission comes sooner than expected when Natalie unwittingly summons some supernatural adversaries. It doesn’t take Toby long to realize he’s in over his head, but he’s still determined to make sure his first mission is a successful one. He just might need a little help.

Something Wiccan by James Drummond is an incredible young adult, paranormal fantasy that is action-packed, heart-thumping and scarily gripping!  Witches, warlocks and avenging spirits of death, do battle in this super thriller.

The story begins with Jack hunting down a vampire in Ireland, then shifts to the Vandenberg Mansion in Germany, before firmly landing in Oregon, USA.  There are lots of characters to follow in this book, but three hold the lime-light.  Toby is back, and with a little persuasion his father allows him to go Germany where he will train to become a hunter.  At 17, he is at the place in life where he is changing from child to man and that brings with it all the normal angst that youngsters go through.  But he is no ordinary teenager for he’s just become the latest recruit of the European Hunter’s Network.  This part reminds me strongly of the X-men, there’s a mansion, a boss in a wheelchair and a butler with mystic powers.  Not long into his training he is asked to return to America for a simple mission, to find and warn a witch.  Natalie comes across boxes hidden in the loft; amongst the strange items is a book of spells.  She is supposed to be hiding drugs for a neighbor – a part of the story that makes this book unsuitable for children.  All too soon, Natalie realizes that she’s inherited her family’s power of witchcraft and that she has more power than is normal.  Hungry to steal energy life-forces and magic from witches, the warlock Eirik is soon on her scent.  As in Chitty-chitty Bang-bang when the child-catcher creeps onto the screen you instantly know he’s evil, so to do we recognize the warlocks evil nature by his tiny smirk and his dark reflection – clever writing.  Magical mayhem follows.  The plot thickens and darkens with the arrival of an avenging poltergeist with murderous intent.

James Drummond has a great story-telling style.  Although, aimed at young adults, older readers of paranormal and fantasy will really enjoy it too.  Fast-paced and action-packed Something Wiccan by James Drummond is the second book in the Shadow Tales series and another spellbinding tale.  With great characters, and a frighteningly good plot, this witchy spine-chiller comes highly recommended by She Writes Magazine.