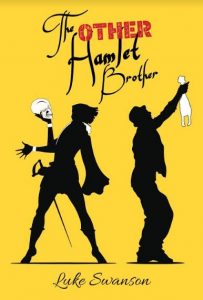 The Other Hamlet Brother by Luke Swanson

Meet Tim Hamlet, the identical twin brother of the famously melancholy Danish prince. Tim has abandoned royal life and is trying (and failing) to make it as a playwright in London. But then, tragedy rears its ugly head—King Hamlet dies, Claudius takes the throne, and young Hamlet dons an “antic disposition.”

Tim charts a course for home despite his better judgment, setting sights on Denmark for the first time in years. On his journey, he crosses paths with Nick Bottom, Romeo Montague, Prospero, and other familiar faces, all the while on a collision course with fate. This tragically funny and funnily tragic adventure will keep you on your toes every step of the way, never knowing what exactly will happen next.

If you were to take Shakespeare’s best known plays, toss in a dollop of Monty Python, add a pinch of A Knight’s Tale, and stick the whole thing in a blender for a minute, you’d have The Other Hamlet Brother by Luke Swanson.

Tim Hamlet is the less depressed and less manic identical twin brother of the Hamlet we’re all familiar with. Tired of being in his unreliable brother’s shadow, Tim moves to London at the tender age of 15 to become a playwright. When an envoy sent by his Uncle Claudius summons Tim home to help deal with the fractious Hamlet, Tim decides this would be a good opportunity to take a break from his less than successful theater career and try to mend the rift between himself and his family. Tim’s journey home is more adventurous than expected, and along the way, he meets a number of characters that will be familiar to anyone with the least bit of Shakespearian knowledge – Nick Bottom, Romeo Montague, Prospero, Caliban, and Miranda, just to name a few. As Tim approaches his hometown of Elsinore, he meets up with a band of actors. While traveling with them, he discovers a mysterious play script that changes everything he ever thought about himself and his family and dictates everything that follows.

This utterly unique and quirky novel had me captivated from the first chapter. Calling it humorous or satirical doesn’t do this story justice, because it’s also a heartfelt and brilliant reimagining of stories that we’ve all grown up with. The sly wit that Mr. Swanson artfully includes in the dialogue is equal to what we expect to read in the Bard’s writing. On the flip side, this story also deals with weighty topics such as fate versus free will, honor, the dynamics of a dysfunctional family, and finding your reason for being. The story moves along at a good clip, yet spends enough time on each part so that you see Tim develop a stronger sense of self and lean into his part of the tale.

Luke Swanson has managed to create a story that swings between comedy and tragedy without missing a step. His clever writing keeps you on track and firmly fixed in the action. Fans of Shakespeare will appreciate the fresh twist on the classics, and I highly recommend this book for fans of satire, drama, adventure, and fantasy. An absolutely stellar read! Artisan Book Reviews is proud to recommend The Other Hamlet Brother by Luke Swanson. Book reviewed by D.L. Smith for Artisan Book Reviews.

Buy The Other Hamlet Brother by Luke Swanson today!!

Award-winning author of stories with a Bollywood beat

All Genres for All Readers